Lee Abrams is a health and wellness influencer with a…

Skirt. | The Next Chapter

Nafsika Antypas is a TV host, producer, activist and entrepreneur. She founded the non-profit, People Against Violence in 2014, helping victims of violence seek guidance and assistance with its 24-hour hotline, monitored by certified counselors. But being a passionate vegan, Nafsika felt that the only way to truly help make the world a more compassionate place is to help people go vegan. So, in late 2015, Nafsika put together a unique show that within 6 months would become the first vegan lifestyle series to ever hit mainstream television, reaching 70 million households.

The TV series, Plant-Based By Nafsika focuses on a plant-based diet and vegan living, a concept Nafsika hoped would help change the world through food. This has not only sparked the interest of viewers around the globe but has “planted seeds” helping veganism become more mainstream, a goal Nafsika conveys in her motto, “If You Plant It, It Will Grow.

What made you decide to become vegan?

Seven years ago, I came across a documentary on Netflix called, Vegucated. I made the mother’s milk connection right away because I was literally nursing my son while watching it. I thought to myself, I’m not going to steal another baby’s milk!” I decided then and there that I was no longer going to contribute to this cruelty and went completely vegan the same night.

What was your vision when you launched Plant-Based by Nafsika?

In 2015 (two years after going vegan), I started putting together a talk show. I wanted to help people go vegan and because I had a hard time finding a show like what I envisioned, I said to myself, “I’m going to make a show!” Plant-Based By Nafsika started airing on the A&E network in 2016 making it the first and still the only vegan lifestyle/talk show series on mainstream television!

What is the most important part of the vegan lifestyle to you?

Knowing that I am no longer contributing to cruelty of any kind. The health benefits is just an added perk.

Tell us about Nafsika’s Garden.

Although I had the TV show, I wanted to take it a step further and make it really easy for people to go vegan. And for many, missing cheese and dairy products is probably the main reason most people are reluctant to go vegan. So at the end of 2018, I launched Nafsika’s Garden across Canada. Then, a few months later, across America. My brand is growing and expanding internationally. The demand for vegan products is increasing every day and so I’m really looking forward to a more vegan future.

What advice would you give someone who is considering changing to a plant-based lifestyle?

Easy, take my 6-week course! “Make the Plant-Based Switch” is available online (at nafsikaantypas.com) and a book version is coming out this Fall! On top of some very useful information, my course offers daily menu plans and tons of recipes.

For some quick advice, I would recommend you take note of your daily meals to make sure you are getting all of your nutrients (as you probably are if you are eating whole plant-based foods) and get your annual blood work done. (Mainly for those concerned family members!) And, I can be reached on my website or by email for any questions or concerns.

What’s a share-worthy recipe for the woman on the go?

Here is one of the signature dishes that I like to call, The Plant-Based Special! This herb-seasoned dish is not only full of incredible flavour but has a wonderful array of colours that just happen to accent my favourite colour, purple! It’s also super easy to make. Let’s go! 💜 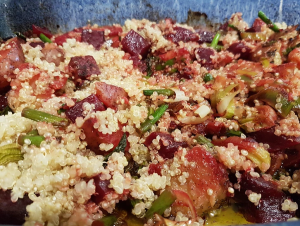 a handful of asparagus

half a leek, chopped

Oregano and your choice of herbs

Preheat oven at 400 F. Season the potatoes first generously. Add into baking dish all of the ingredients except for the quinoa, and toss together. Be generous with the EVOO. Add a touch of water as well. There should be some liquid at the bottom of the dish which will help the vegetables cook but not burn. Once everything is mixed well, bake uncovered at 400 F for 1 hour. Toss half-way through. While the vegetables are baking, boil the quinoa. Simply follow the instructions on the packaging. (For every cup of quinoa, add 1.5 cups of water.)

Once vegetables are done cooking, toss in the quinoa into the baking dish and mix well. The purple beets will give the quinoa a beautiful purple color.

Lee Abrams is a health and wellness influencer with a strong voice in women's equality. She has amassed a global fanbase through her years as blogger. Lee's focus and vision for SkirtSmarts as lead writer is simple, celebrate women.